Nyhetsbrev
LINK
The Covid-19 pandemic has had a sharp and sudden impact on the global economy. While the current crisis is placing strain and uncertainty on all sectors of the economy, some sectors are in better positions than others. Technology companies or other companies with recurring revenue are generally high in demand and companies scoring high on ESG (environmental, social and governance) the same. There is also a growing sense of optimism that the market will recover sooner rather than later.

Measures put in place to reduce the spread of Covid-19 sent the global economy into recession and it has been suggested that the recession will be the deepest since World War II. M&A activity typically follows economic cycles closely. According to Mergermarket data, the global number of deals fell by 35% in the first half of 2020, compared to the same period last year. Deal values shrunk by 39%. 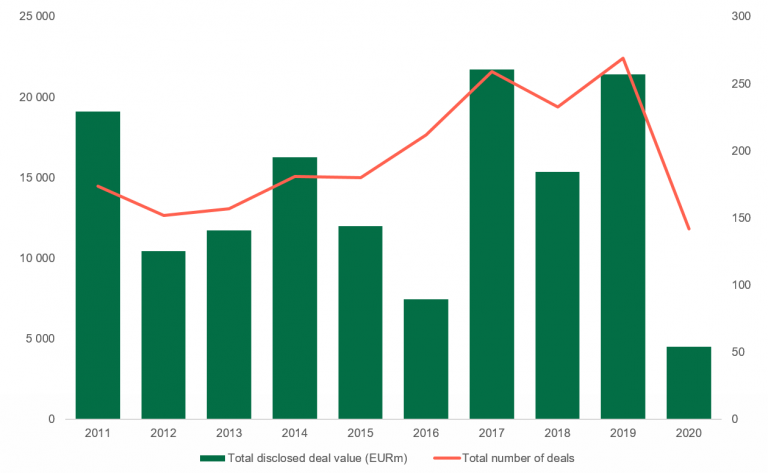 Even if the buyer and seller manage to bridge the valuation gap, third party financing may be difficult to obtain or may have terms and interest rates that are not acceptable to a buyer. On the other hand, unlike the global financial crisis of 2007-2008, the current crisis did not originate in the financial markets. This means that the financial sector is more robust and better positioned to provide financing for companies looking to make deals. According to Wiersholm’s M&A partners Harald Hellebust and Sverre Sandvik  there is, amidst the uncertainty, a growing sense of optimism that the market will recover sooner rather than later:

Since the root of the current crisis is less due to a credit crunch, and more related to disease preventive measures placing an “artificial” constraint on demand, recovery may potentially be speedier. Although the long-term effect of productivity losses and the impact of any new waves of the pandemic create uncertainty about the speed of recovery, there is generally more optimism in the Scandinavian market than what was the case for just a few weeks ago.

The current environment may even pose an opportunity to pursue long-term targets at lower valuations or pick up distressed assets, for some. The adjusted average global EV/EBITDA multiple was at its lowest level since 2013 in the first half of 2020. Norway may have had a similar development, but the statistical basis for such conclusion is thin. One possibly more important effect for prospective buyers is that the sell-side processes have been generally less crowded, leaving buyers with additional flexibility to spend time getting to know the target and to negotiate an acceptable deal. While the current crisis is placing strain and uncertainty on all sectors of the economy, some sectors are in better positions than others. Technology companies or other companies with recurring revenue are generally high in demand and companies scoring high on ESG (environmental, social and governance) the same. 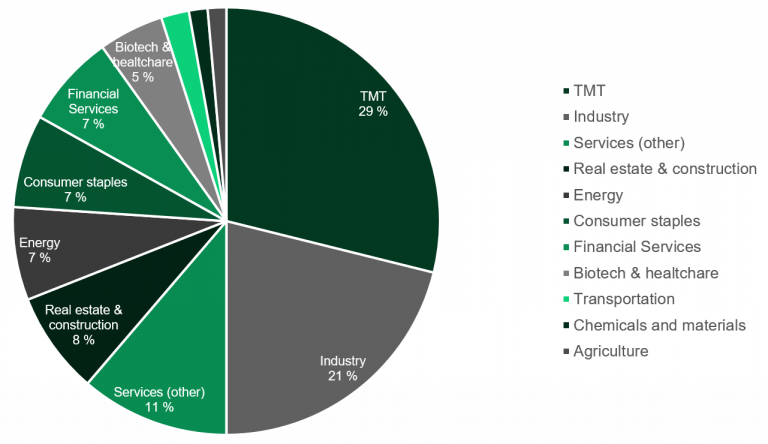 Q1-2 distribution of target sector of deals in Norway

A number of capital markets transactions were put on hold following the Covid-19 outbreak and the simultaneous oil price collapse, but activity has since picked up. Reports from investment banks suggest there will be busy days before the holiday kicks off as market conditions gradually turn more favourable. Technology, renewable energy and biotech are the most attractive sectors, while the early-stage marketplace Merkur Market has been the arena for the majority of new listings.

There were eleven new listings across the three markets of the Oslo Stock Exchange (OSE) in the first half of 2020 – more than the first half of 2019, but with a significantly lower average market cap and offering size. Eight of the new listings were on Merkur Market, which offers one of the fastest admission processes in Europe, making it a good option in times of volatility. Subsequent transition to Oslo Axess or the main list is also relatively simple.

Merkur Market has certainly evolved from a peripheral “junior market” to a more attractive place for small and medium-sized growth companies. From eleven companies with a combined market cap of NOK ~3bn by the end of 2016, the marketplace currently comprises 30 companies, valued at NOK ~30bn. Ongoing processes suggest that there will be more entrants to Merkur Market before the year is over.

Two of the three listings on the OSE main list were finalised prior to the Covid-19 climax, with BW Energy and Northern Ocean listed in the second half of February. The largest IPO by some distance was Pexip Holding. The video communications provider went public during the lockdown, and benefitted from a surge in remote work and a corresponding demand for video conferencing. The market valued the company at around NOK 8,800m at the time of listing. In terms of Merkur Market listings, the IPO of the Marine biotechnology company Aker BioMarine was the largest, with a current market cap of ~ NOK 9,197m. 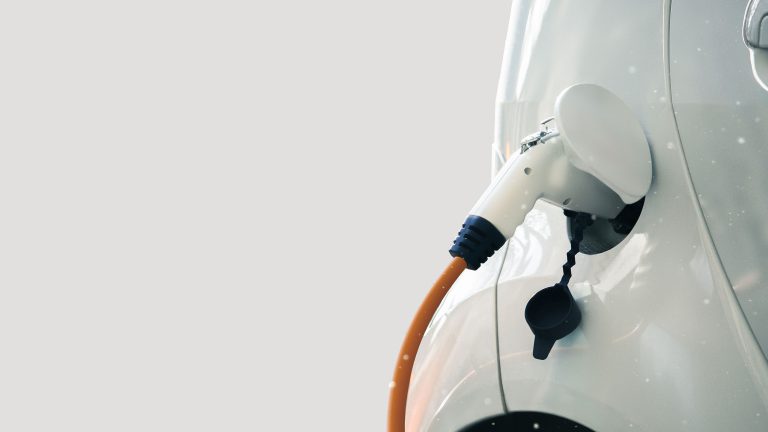 Despite the backdrop of record low electricity prices and the economic uncertainty related to the Covid-19 situation, activity in the renewable energy sector has remained relatively stable. The sector continues to benefit from investment megatrends revolving around impact investment and ESG. A number of infrastructure, pension and insurance funds need to deploy capital in the current low interest rate environment, and renewable energy remains in demand.

This especially applies to companies whose business models combine clean technology and end-user interaction. Wiersholm recently advised the London-based investment firm Infracapital on its acquisition of a majority stake in Fortum Recharge – a charging point network for electrical vehicles in the Nordics. Fortum Recharge is the largest charging point operator in the Nordics, with over 1,350 charge points and Norway as its largest market.

Fundamentally, this business model is similar to that of other cleantech disciplines catering to end users/individuals, such as smart house technology, solar power and sustainable transportation. These companies gather valuable data about their customers and can create tie-in effects that enable bundling and unique cross-selling opportunities. Accordingly, such companies are likely to be sought-after targets in the years to come.

Elsewhere in the renewable energy deal space, the Norwegian electricity grid sector continues to see consolidation. Troms Kraft and Bodø Energi announced plans to merge their grid companies in April, potentially forming the sixth largest distributor of electricity in Norway. Talks are currently going on between other industry players, and additional mergers are likely to take place in the near future.

Municipalities and county authorities own most of the regional and distribution grids today. But plans to add more renewable power generation, bolster exports and digitalising old infrastructure will require considerable capital and know-how going forward. In addition, the new legal requirements for ownership unbundling imply that many of the grid companies that were previously part of vertically integrated groups must look elsewhere for scale advantages.

Moreover, regulation of grid operations embeds an economic scheme that provides grid companies with incentives for cost-efficiency. The companies are subject to an income cap that is partly based on general and individual efficiency requirements. This ultimately means that the consolidation trend contributes to a self-reinforcing process where larger and more efficient companies raise the bar, increasing the potential rate of return through economies of scale.

The downturn in oil and gas

Companies in the oil and gas industry have been severely hit by the downturn due to a combination of Covid-19 and the oil price war. The transaction volume in the segment has been dramatically reduced. The regular drivers for M&A deals in oil production – balancing development and production activities and optimising tax positions – will not give incentives when liquidity is scarce and regular production activities are loss making.

According to Wiersholm’s Oil an gas partner Kristian Martin Lind, it is not unthinkable that we will experience the first default of an oil producing company on the NCS in this downturn:

That will in case be a complex situation with several interests involved, both secured and unsecured creditors, jointly liable partners in the relevant licenses and governmental agencies approving transfers of interests.

The first signs of struggling entities have already materialised, and there will certainly be interesting opportunities going forward for opportunistic investors. With the regulatory framework, different approaches can be made by investors that in some cases can create “option-like” transactions.

M&A activity in oil services has been low for a long period. It will be interesting to see when the refocusing of these entities to more renewable projects will change the investors’ perception and interest in these companies.

Save the date for Nordic Buy Out Forum 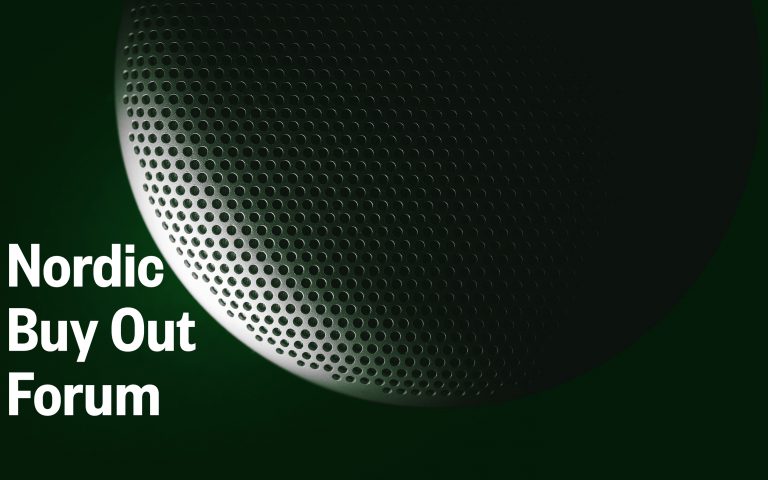 The 10th Nordic Buy Out Forum takes place 3 December 2020. Join us for the most important annual M&A event in the Nordics.